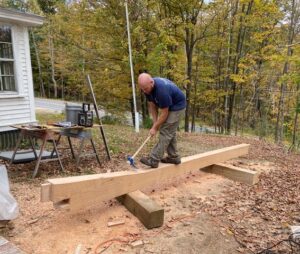 Founded in 1981, Colonial Restorations, LLC specializes in the structural restoration of post and beam houses, barns and other historic timber framed structures. Colonial Restorations, LLC was started by Tom Green in 1981. In 2000, Tom’s son, Brad, became a partner in the business after graduating from Wesleyan University in Middletown, CT with a degree in economics. Growing up in the business, Brad has added his considerable timber frame experience, in addition to his training in computers and economics. In his free time, Brad is an avid triathlete and recently completed his first Ironman. He also enjoys the outdoors with his wife and son. Brad has owned two historic homes in his life. He purchased an abandoned 1775 home and restored it to its former glory. He recently sold that and moved to a 1780 home to start all over again. Brad is a lifelong student of the restoration of the New England post and beam timber frame and is always learning something new and teaching others at conferences and seminars on the subject.

Chad St. Laurent joined the company in 2017. His past experiences in construction gave him the background knowledge to contribute to the company over the years. He earned his Construction Supervisor License in 2021 and became a project manager. In his free time, he enjoys American Kenpo karate and is working towards his black belt. He also enjoys the outdoors with his wife and dogs. Chad is a veteran of the US Army.